Has any five minutes of reality television been more painful than watching Ricky Martin “reading” RuPaul? They weren’t even clever reads, and no one is easier to read than RuPaul. Like, he could have said “RuPaul, how much money did you get for selling your soul?” or “So how long until this make-up artist doesn’t make you look like complete shit?” or “Hey, RuPaul, how’s the fracking?”

…What the fuck else do you want me to say? She’s the generic brand of weird that corny White people try to sell as zany. “I’ll perform in my pickle character no one freaking remembers.” This is really my big issue with Cracker: she’s never done anything particularly noteworthy. Remember the random rivalry she had with Aquaria? Of course you don’t, it was almost instantly overshadowed by Vixen accusing her of playing a helpless, White victim. I can not think of anything Cracker did that was really impressive or even funny.

Oh, and she screams all her confessionals. Like we needed that.

Full disclosure, I actually don’t think this was a good premiere for All Stars 5. Most of the cast were underutilized, and the show is only reaffirming the notion that these are bottom rung All Stars by having the challenge winner be completely overshadowed by someone outside the competition. India is arguably the most present Queen of the nine left, and her losing the lip sync just makes me think, “You’re right, show, I would rather be watching Yvie Oddly.” And if anyone suffers from this most, it’s Mayhem.

With the drama of the episode centered squarely on the challenge winner and the boot, it’s easy to forget that Mayhem was even in the bottom. And it’s not as if she was present before this either. As much as Mayhem got the shaft in Season 10, it was never this bad.

Pro tip: If you’re going to go on a reality show where you know the first challenge is a talent show, make your talent is something you didn’t learn 5 days ago.

For those keeping score at home, it took them a full seventy seconds to state the obvious fact that Alexis is mostly here because she birthed Vanjie.

Honestly I’m shocked they showed even that much restraint.

Every season needs a predictable early boot, and if you can’t tell it’s going to be Ongina, then you need to get some new glasses.

After an unassuming, normal introduction, we get our first taste of failure with Ongina bombing the reading challenge. After this, we only see Ongina once before the talent show, and it was Derrick offhandedly dismissing her fears that anyone talks shit about her with a “Don’t worry, no one talks about you.” And if that wasn’t clear enough a sign that Ongina was doomed, we get a moment of nearly every other contestant in Untucked saying they’re shocked she wasn’t bottom 2.

Ongina’s tenure in All Stars 5 is has a vicious and mean-spirited start. I would say this was malicious of the show to do this to her, but… she really did suck.

A lowkey episode for Jujubee as well, unfortunately. What little we saw of her was still great (it’s Jujubee, of course it was), but yeah this relatively high ranking is based completely on my love for Juju in general.

Leave it to Mariah to blow everyone away with an impactful, thought-provoking message about systemic racism that goes completely over the heads of the judges. Of course, with everything happening right now as I write this, it’s retroactively completely tone deaf for the show to not give Mariah a top spot but instead a pat on the back.

But then, since when has Drag Race ever been timely? 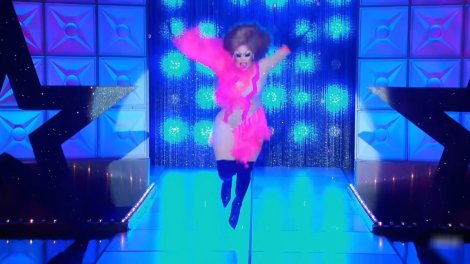 So I mentioned that this episode was lowkey for… damn near everyone, and that Ongina was getting the early boot edit. But, weirdly enough, so is the challenge winner?

India was one of the few present contestants this episode, but none of it was exactly positive. She spent her entire time with a throbbing hate-boner for Derrick, which would be uncomfortable if Derrick wasn’t throwing all of it right back with gusto. Naturally, you would think this would mean that India would get to eliminate Derrick, but lol no here comes Yvie to dance circles around you like the real life Voldo from Soul Calibur that she is. Thus India’s entire point to the episode, and arguably the season, is shafted and instead given to someone who said less than a dozen words.

As much fun as this was, it can easily become tedious. I’m not sure how India will fair after this episode eliminated her one point of existing (Jesus this was such a stand-alone), but she’s going to have to find something with more meat if she wants to staynear the top of my rankings. 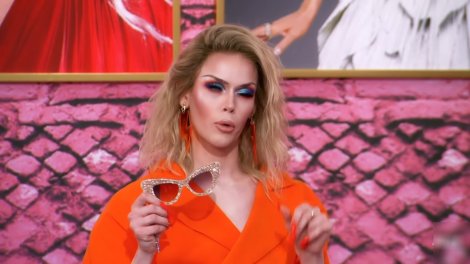 Despite being a D-List Drag Queen on a premiere where that tried to hide everyone not named Derrick, Blair defied all odds be being interesting to watch, even if she was deemed Safe. I naturally appreciate any contestant whose entrance outfit looks like a prison uniform, especially when paired with make-up that looks like you just got into a fight with a fellow inmate. And props for actually being funny in the reading challenge, a feat that is surprisingly hard.

But of course, her best moment came in Untucked, where after the Safe girls realized that India was going to eliminate Derrick a full five hundred years after every fan realized this, Blair asked the serious question if the show was going to use full on voting polls. Blair with the true priotories. And while that may not be spectacular, in an episode where only one person got real depth, I’ll take it.

Now, as I said, I find this episode really lackluster as a premiere. Most of the cast feels hidden, the new twist feels incredibly misguided and self-defeating, and there doesn’t feel to be any real set-up for future episodes. As a premiere, the episode fails. But as a thrilling, emotional character piece about my misunderstood angel, Derrick Barry? It’s excellent.

Derrick comes in, dead on arrival, predestined to be the first boot, and she has no idea. You can tell she is trying so hard to taken seriously by her competition, but she just ends up confusing people on her presentation. She alienates the entire werkroom by constantly touching and picking at the scab that is her relationship with India, and coupling that with Mayhem’s internal popularity, Derrick’s time was never going to last.

And the thing is… I get where she’s coming from. Full disclosure, I honestly do believe Derrick was set-up to be the first boot. This isn’t just about being cast with India, although it must be said that the intended returning Queen was Shannel, Derrick’s ex. No matter what Derrick did, she was either going to be too Britney or not Britney enough. And while that indecision and lack of diversification cast her in a negative light in Season 8, it’s obvious here it’s out of confusion. Derrick has no idea what she could do to make the producers happy, or even if she could. She hypes herself up about her non-Britney talents, but still lets you know that she is the Britney of Vegas, has a popstar-like entrance, and wears a hoodie with iconic Britney outfits plastered all over it, 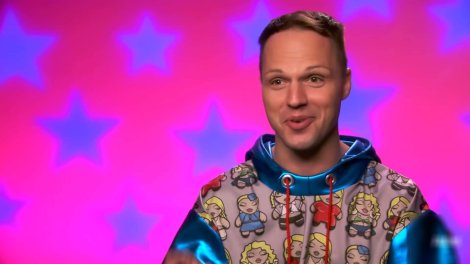 This is my favorite confessional outfit ever.

There’s a tragedy to Derrick. And as easy as it is to mock and make fun of it, I can’t help but love her. She’s my tortured, misunderstood goddess, cut way before her time. And All Stars 5 will be less without her.

Next Time on RuPaul’s Drag Race!

Derrick gets her revenge!